Hotel Room Cooking For Your Trip To Disneyland

On our trip to Disneyland, we didn’t eat out once. Not once! The tickets and hotel room and travel were a big enough cost without adding the extra expense of eating at restaurants or even fast food. If you’re planning a trip to Disneyland (or anywhere else, for that matter), here are some times for hotel room cooking:

1. Find out ahead of time what amenities your hotel offers. I knew mine had a mini-fridge, but found out when we arrived that they also had a microwave. I would have prepared very differently if I had known that, so I’m wishing I would have just called the hotel and asked.
2. Bring food from home. I planned out every breakfast, lunch and dinner and purchased as much of the food as I could at my local grocery stores before the trip. I shopped the sales just like I normally do, so most of the food was not more than I would have paid if we had been at home eating during a normal week.
3. Methods of cooking: 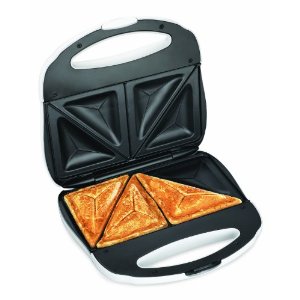 – Sandwich maker. We had grilled ham and cheese sandwiches that were divine after a long day at the park. You could also make pizza sandwiches with spaghetti sauce and pepperoni. Or peanut butter Nutella banana sandwiches if you want something sweet. Or any other grilled cheese variation you can dream up.

– Coffee maker. Most hotel rooms have a coffee maker, so anything that just needs hot water added works great. I brought several packages of Cup A Noodle and they ended up being a hit because we were all so tired and didn’t want to fuss over anything hard to fix.

– Crockpot. I brought ours along with us and it was okay, but it didn’t work out as well as I was hoping. I learned from my mistakes and see how I could make it work in the future. Part of the problem was that we were gone for SO LONG each day that by the time we got home, the food was overcooked. If I had been smart, I would have put the food in when we came home for our mid-day siesta (read about that here). There are some food safety issues if your crockpot sits on “warm” too long and I ended up tossing the pulled pork we had been cooking because it sat way longer than I was comfortable with. I didn’t want to ruin our trip with a possible case of food poisoning. That woulda been fun. Ha! So if you decide to do crockpot cooking, I recommend doing recipes that can withstand a long cook time (the pulled pork could have been awesome) and plan your day so that it doesn’t cook longer than 8-10 hours.

The second meal I made in the crockpot was a meaty spaghetti sauce. 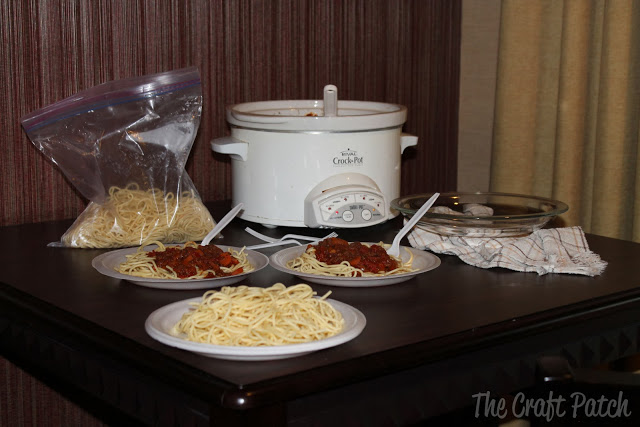 It was pretty tasty, but some of the edges got a little burned because it cooked for so long. I pre-cooked the noodles and rinsed them to remove the starches that make them stick together. I was planning to reheat them with hot water from the coffeemaker, but ended up using the surprise microwave instead.

One absolute must is to use crockpot liners. I bought a 4-pack for $2 and it was a lifesaver! It made clean-up a breeze—because can you imagine trying to scrub out a crusty crockpot in a hotel bathroom sink? Nightmare! With the liners, we tossed everything in the trash, wiped out the crock and were ready to roll. Totally worth $2.

Well, that’s all folks. Hopefully I’ve given you some ideas of how to cook in your hotel room. It was really nice to save the money and eat home-cooked meals while away from home.

Added Later: We purchased our Disneyland tickets and hotel through Get Away Today and it saved us $150. At the time I was not affiliated with the company at all… they were just the best deal I could find after scouring the internet like a bargain hunting crazy lady. Three years later and I’ve joined their affiliate program because I love them so much! If you click on the Get Away Today link above and enter the promo code “CraftPatch” you can save an addition $10!

Disneyland With A Baby

What to Bring to Disneyland