Valentine's Day Crafts
Hi friends! I love a good themed party. Aren’t they just so fun? Today I’m sharing a cute snowman party that is chock full of ideas you can use to throw your own snowman party. Here’s the whole spread: 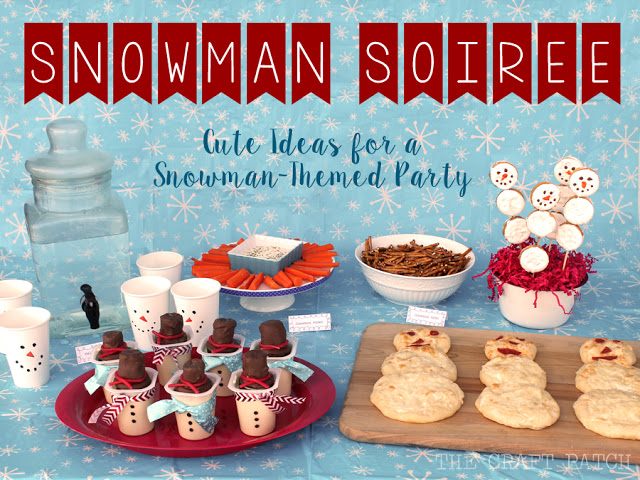 Cuteness overload, right?! I love it!

Let’s look at each component separately.

I bought everything, including the snowflake tablecloth, at WALMART. They had some really cute snowman plates too: 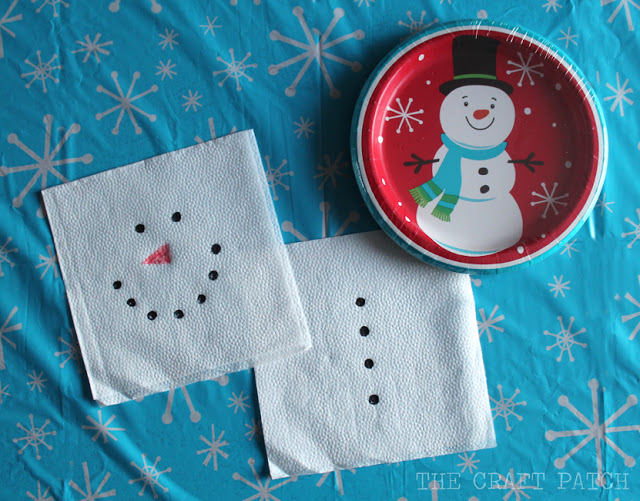 I used a marker to draw snowman faces and snowman buttons to regular white napkins. It’s the little things, right? 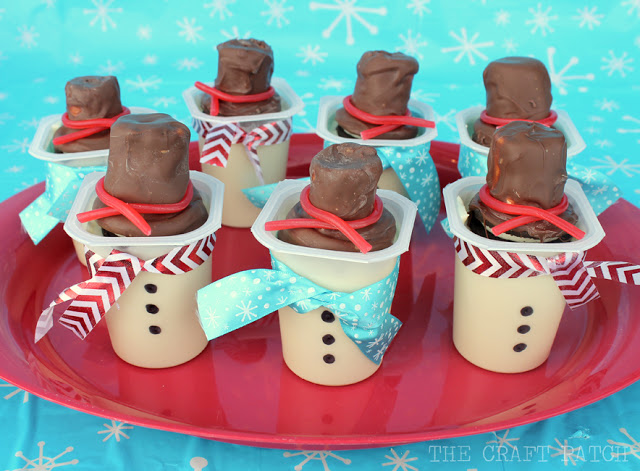 I bought the large sized Snack Pack cups so there would be enough room for the snowman decorations. They are with all of the other Snack Pack cups, which are located by the popcorn, beef jerky and other snacks at my WALMART.

I tied festive ribbon around the top of the Snack Pack pudding cups and used a bit of hot glue to keep the ribbon in place. Then I used a Sharpie to draw buttons on the cup.

To make the top hats, you will need OREO cookies, marshmallows, pull-apart licorice and chocolate chips.

Place a large sheet of wax paper on the table. Melt the chocolate slowly in the microwave. Carefully dip the OREO cookie in the chocolate and set it on the wax paper. Then dip the marshmallow and place it on top of the OREO.

Some of my marshmallows were really large, so I rolled them between my hands to make them smaller so they’d look better on top of the OREOS. When the chocolate is completely hardened, peel off one strand of licorice and wrap it around the hat. 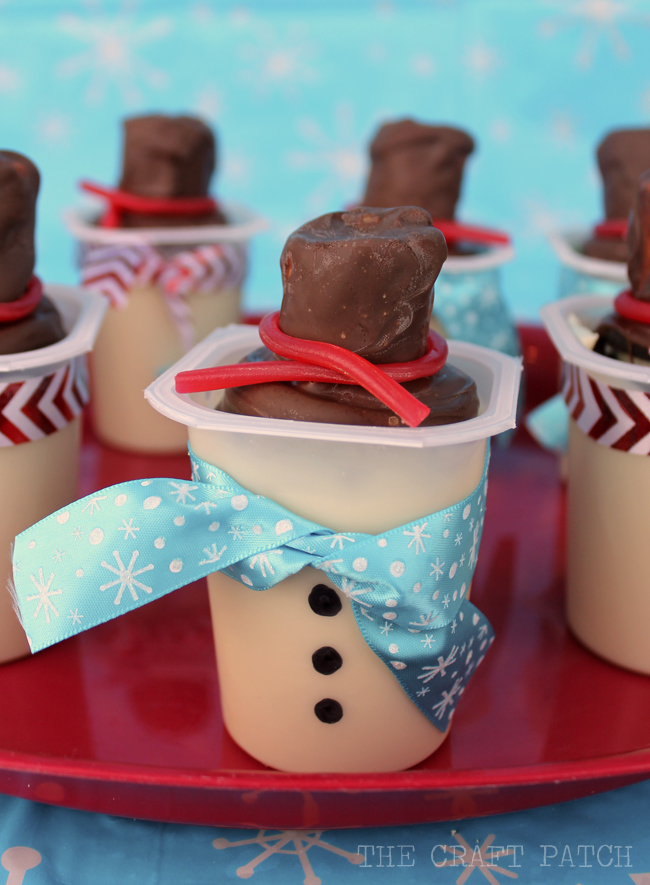 For the drink, I served “Melted Snowman” water. I bought plain white cups and drew snowman faces on them. Easy and cute! Just the way I like it! 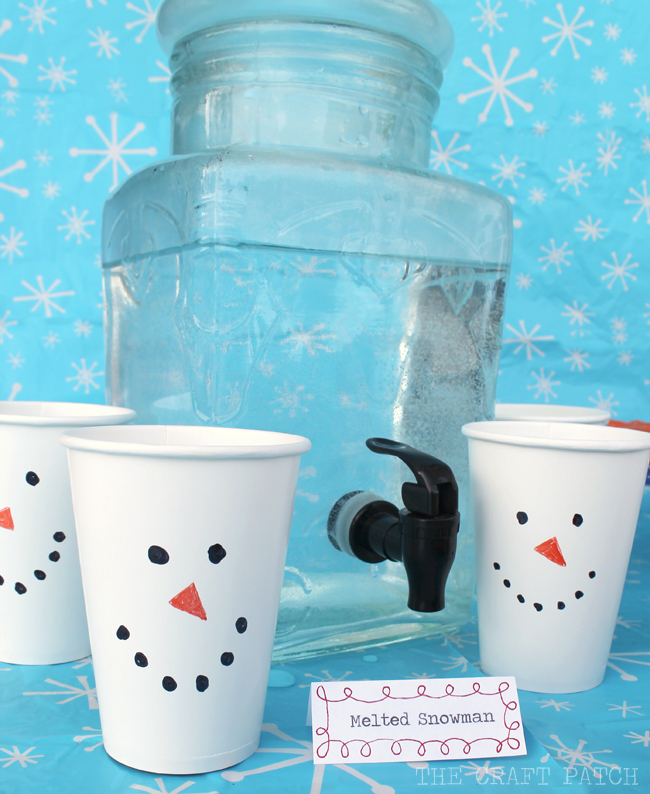 I also made Ritz cracker peanut butter sandwich snowmen on sticks. To display them for the party, I put a piece of foam into a bowl, stuck the sticks into the foam, then covered it with shredded paper. 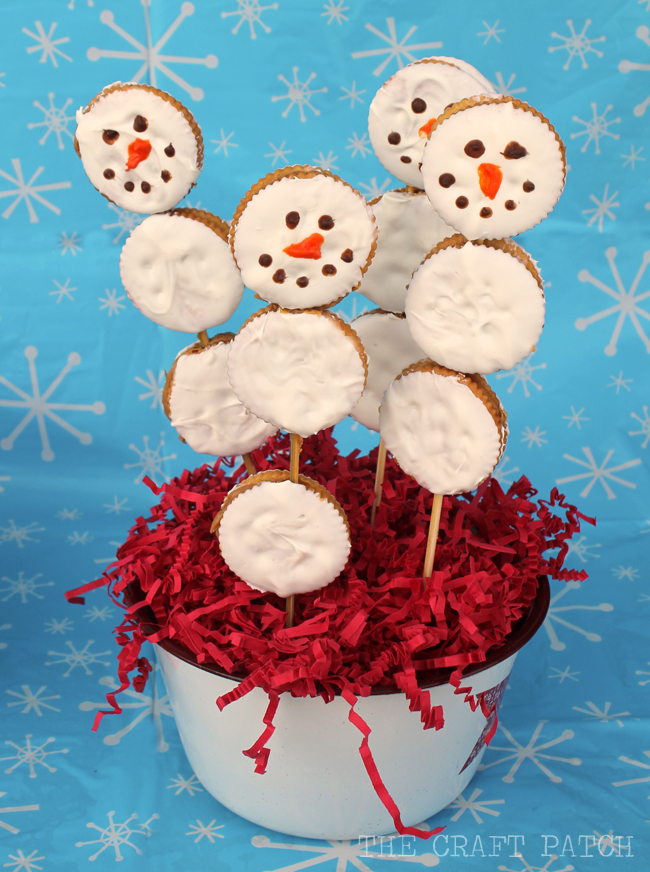 To make your own Ritz cracker snowmen, start by melting white chocolate. (1) Dip one face of the Ritz cracker into the white chocolate, then place on a plate to dry. (2) When the chocolate is completely hardened, smear a generous amount of Peter Pan peanut butter on one side. Line up three cookies and place a wooden skewer through the centers of all three cookies. (3) Smear peanut butter on three more crackers, then place them on top of the other crackers, sandwiching the stick between the two crackers. 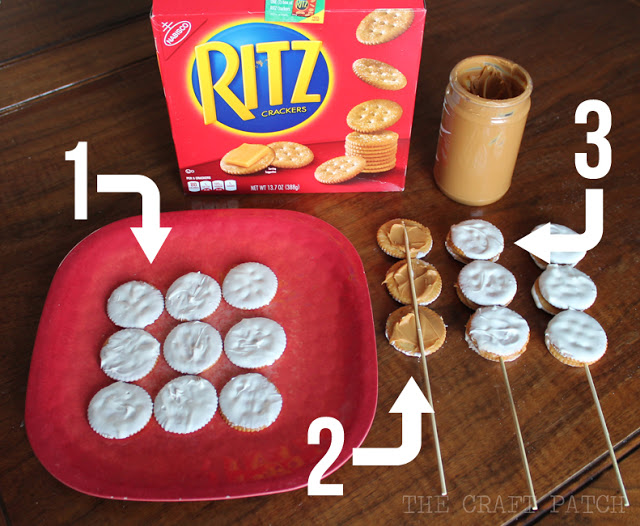 To add the faces, I used melted chocolate and the flat end of a skewer. For the carrot nose, I made a teeny bit of orange frosting by mixing a tablespoon of butter with orange food coloring and just enough powdered sugar to get the right consistency. 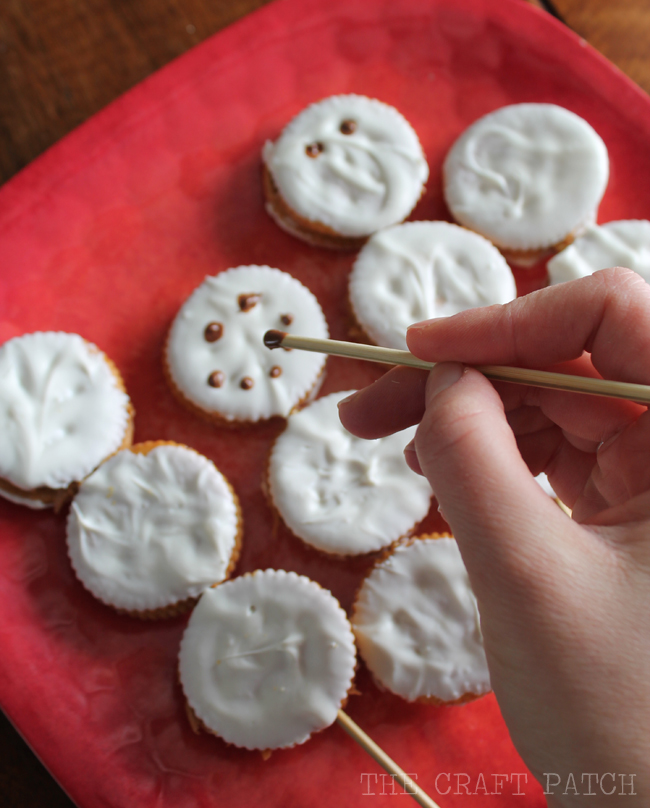 The main course at our party were these cute snowmen pizzas: 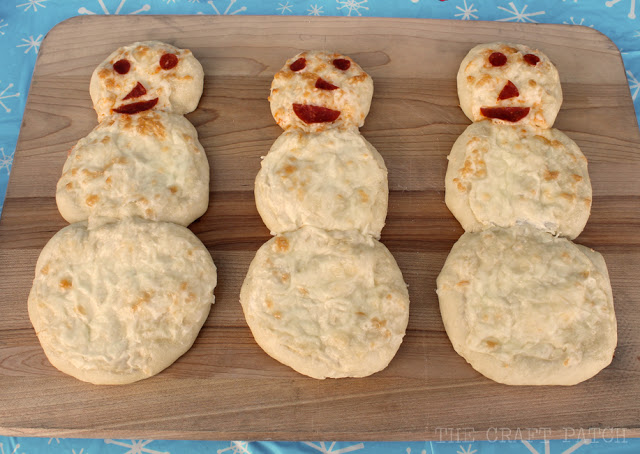 I shaped the dough into three balls: small, medium and large. Then I flattened them on the baking sheet and pinched the circles together. 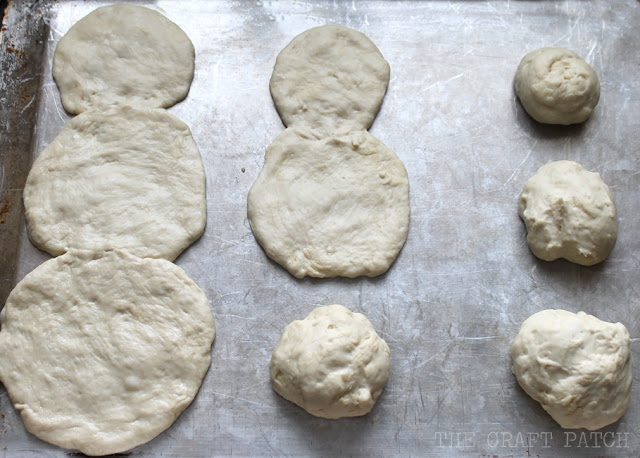 Then I spread the crust with Bertolli’s Alfredo Sauce and sprinkled on plenty of mozzarella cheese. 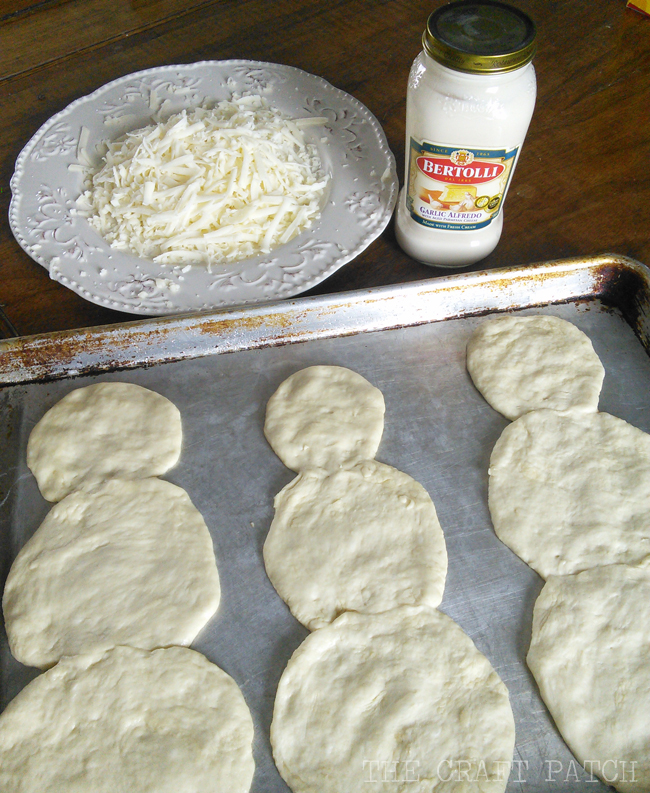 The last step before baking was to add pepperoni eyes, noses and mouths. Olive  would be really cute too, but I didn’t use them because my kids don’t like them.

I cut up a bunch of carrot sticks and set them out with some ranch dressing. I think “Snowman Noses” sounds better than “carrot sticks,” don’t you? 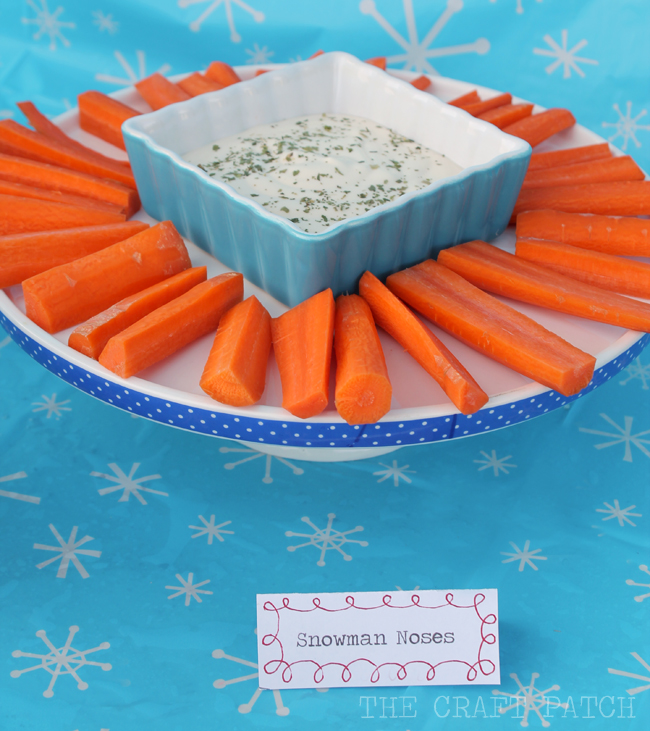 The last party food was the most simple of them all. I opened a bag of HK Anderson Salty Stix pretzels and whala! Snowman arms! 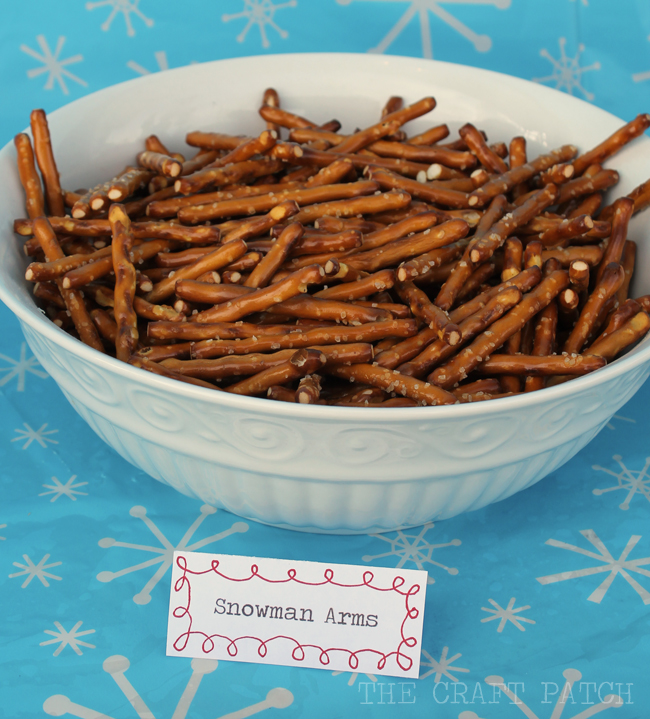 I had so much fun planning this snowman party that I made an entire Pinterest board full of snowman themed food, party games, and decor.