Valentine's Day Crafts
I mentioned in my Cheap Eats posts how our family doesn’t eat cold cereal. It’s too expensive and it doesn’t fill us up. Usually we have oatmeal, but sometimes I make homemade granola. It’s a nice change when we’re all tired of oatmeal and it’s much cheaper to make than it is to buy.
My kids like their granola pretty plain…they only want corn flakes added. That’s fine with me because it’s cheaper! I love adding pecans, coconut and dried cranberries to mine. It’s good eaten like cereal with milk poured over it. It’s also really tasty on top of yogurt. 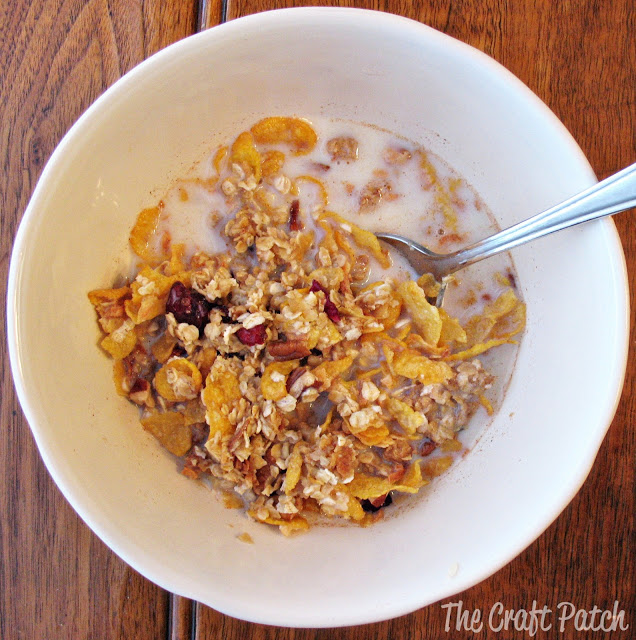 Easy Granola
5 cups quick oats
3/4 cup coconut (optional)
1/2 Tablespoon cinnamon
1/4 cup oil
3/4 cup honey or 3/4 cup brown sugar
2 tablespoons maple syrup (I use cheap pancake syrup)
1/2 teaspoon vanilla
Extras: corn flakes, chopped nuts, dried fruit, wheat germ/bran, flax seeds
Mix oats, coconut and cinnamon together in a large bowl. In a saucepan over medium heat, stir the oil, honey and syrup constantly until combined. Remove from heat and add vanilla. Pour liquid mixture over oats and stir until evenly coated. Spread on a rimmed baking sheet and bake at 275 degrees for about 30 minutes, stirring after 15 minutes. The granola will be lightly browned when it’s done. Cool and add in any extras. Store in an air-tight container and serve with milk.
Often I make granola at night after the kids are in bed. I cook it to almost-done, then turn the oven off and leave it sitting overnight. Then in the morning, I just add the extras and serve it for breakfast before putting the leftovers away. I usually double this recipe.