Welcome to Pinterest Tested! Ever wonder if that miracle cleaner is really miraculous? Or what about that homemade facial cleanser? Does it work? This is the place to find out!  I am testing Pins that catch my eye to see if they really live up to the claims made on Pinterest.

I am excited about the test for today. It’s one I’ve seen Pinned over and over, so I had to see if it actually works. 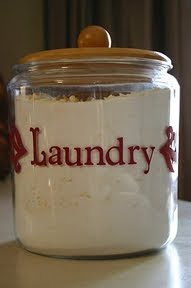 The Test: Is this recipe for laundry soap actually cheaper and does it wash clothes as well as regular detergent?

I went to Wal-Mart to see if I could find all the ingredients I would need and guess what? Wal-Mart had everything and all the ingredients were even next to each other on the shelf in the detergent aisle! I was thinking I would have to hunt all over the store, but nope. All together. How nice! This is what I came home with:

Another hesitation with this project was if it was time consuming to put together. I grated the bar soap and stirred everything by hand in less than 20 minutes. It was easy! I would recommend wearing a mask (or tying a scarf around your face like I did) while mixing to avoid breathing in the dust. It made me choke a little. Or you could do as one reader posted in the comments section and dump everything into your bucket or a garbage sack and shake. Smart!

So my next question was how many loads I would get out of one batch. The original post said it only takes one tablespoon per load. So I measured, oh yes I did! And I was going to do it one scoop at a time until my brilliant husband stated the obvious and had me see how many scoops were in a two-cup measuring cup and then just figure the results from there. Duh. haha. According to my calculations, I will get 462 loads from this one batch.

The original recipe says that the oxygen cleaner is optional. If you left that out, the detergent would be even cheaper…2.7 cents per load. Don’t know if it would clean as well though.

Now for the big question…does this stuff actually clean clothes as well as store-bought detergent? My answer is YES! I can’t tell a difference from what I was using. I’ll post something if I stop feeling that way after I’ve been using it for a few weeks.

This Pin passes The Craft Patch test for sure!

THE RESULTS: A homemade cleaning solution that seems to work as well as store-bought detergent. It was easy to put together and it really is cheaper.


Update: I finally used the last of this soap in mid-March. That means it lasted for one year and two months! Wow!


Read more about the second time I whipped up a batch of this laundry soap HERE.